The Wait is Over: SQL Server 2016 General Availability and Tools


SQL Server 2016 is generally available today. The release blog provides more details. The full featured Developer Edition is free. This can be downloaded.

The generally available release of SQL Server Management Studio (SSMS) is annouced today. It provides a means for accessing, configuring, managing, administering, and developing all components of SQL Server. SSMS combines a broad group of graphical tools with a number of rich script editor. It features improved compatibility with previous versions of SQL Server, a stand-alone web installer, and toast notifications within SSMS when new releases become available. 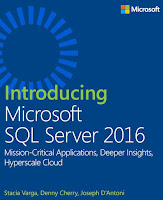 The SQL Server 2016 free e-book can be downloaded. It  covers