The new custom  Performance Dashboard Reports for SQL Server 2012  can be obtained from http://www.microsoft.com/en-gb/download/details.aspx?id=29063

As with the earlier versions of these reports they allow a database administrator to quickly identify whether there is a current bottleneck on the system, and capture additional diagnostic data that can help resolve some common problems such as:

There are 3  parts to the deployment process. 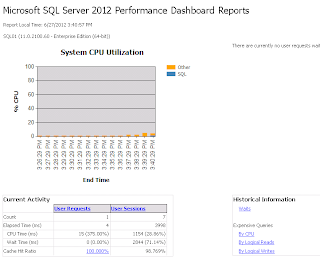