Big Data – What is the Big Deal?

The 3rd SQL PASS Keynote was given by David J. DeWitt of the Data and Storage Platform Division. IT was a brilliant insightful session.

The session started explaining the definitions of Big Data. It is a massive collection of records. To some, “Big Data” means using a new a NoSQL system like Hadoop and Map Reduce or the old traditional parallel relational DBMS to manage the data. Data is the currency of this generation with the realization that data is too valuable to delete.

NoSQL
Not Only SQL - It's about recognizing that for some problems other storage solutions are better suited. NoSQL has a flexible data model, faster time to deliver, relaxed consistency model such as eventually consistent, the willingness to trade consistency for availability, low upfront software costs. Some data is just not worth storing in a relational databases, validating, cleansing, ETL, analyzing or controlling the quality.

There are 2 types of NoSQL:

The other idea that was presented throughout the session was the idea that there are two universes in the new reality. Structured Vs Unstructured. 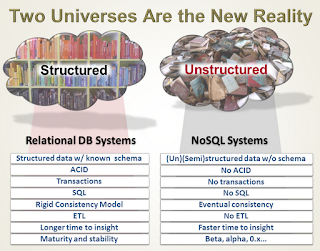 This is not a paradigm shift. The world has changed and the new reality is the RDBMS and NoSQL databases need to work together to address the current requirements in a complementary fashion.

The rest of the session went on to explain about Hadoop and its ecosystem and how the 2 technologies work together.

Some applications need data from both universes in the new world. Where this is the case Sqoop is used to connect the Unstructured (Hadoop) to Structured (RDBMS).