PASS Summit 2013 Keynote: Hekaton Why, What, and How


The day 2 keynote was excellent from David DeWitt.  The main differences of Hekaton, In-Memory Databases is that it is memory optimized but durable, a very high performance OLTP engine, fully integrated into SQL Server 2014 and architected for modern CPUs.

Other products on the market with in memory technology are Oracle TimesTen, IBM SolidDB and Volt VoltDB, but  SAP Hana is not a direct competitor.

This new technology is not the same as the old functionality of pinning a table in memory. In the current core engine there is the need for concurrency control, locks and latches and interpreted query plans.

In the 1980’s the database field explorer had the use of many different concurrency control (CC) mechanisms. The technique (due to Jim Gray) known as 2 phase locking emerged as the standard. There are a variety of lock types including X(eXclusive) and S(shared). There are two simple rules to follow. Before access, the query must acquire an appropriate lock types from the lock manager and once a query releases a lock, no further locks can be acquired.  Jim Gray won the ACM Turing Award for his work on transaction processing.

A comparison between the two engines and the required 3 components. 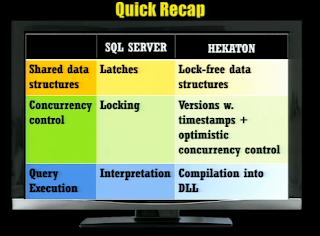 In SQL Server 2014 it uses lock free data structures invented by Maurice Herlihy at Brown University, who was elected to National Academy of Engineering. The first phase is to create a memory optimised table. Then the concurrency control components are:

Each row version has an associated time range
Transactions use their begin timestamps to select correct version
Timestamps  are also used to create a total order for transactions to obtain equivalent of a serial order. 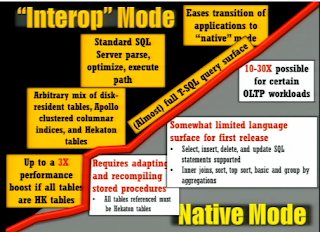 The slide deck can be obtained from  http://gsl.azurewebsites.net/People/dewitt.aspx and I would recommend looking at this  excellent presentation.